An Initiative for Emerging and Developing Countries 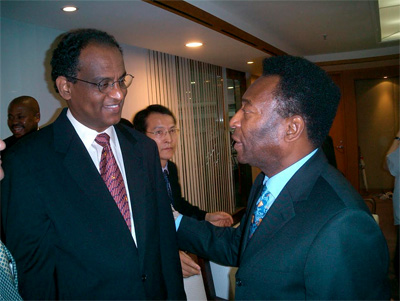 The most popular sport in the world, soccer has played an important role in mending fences between nations. Known generally as "football" throughout the world, this sport has brought traditional enemies together, and has even stopped wars.

During World War I, British and German troops on the front lines came out of their trenches on Christmas Day of 1914, put down their guns, and played a soccer game. Brazilian star PelÃ©'s 1969 trip to Nigeria with his soccer club, Santos, spurred a three-day cease-fire in the Biafran War. In 1990, warring factions in the Lebanon War took time out from killing each other to watch World Cup games beamed in from Italy.

In 2002, Japan and South Korea, longtime enemies with lingering animosity, worked together to co-host the World Cup. In 2000, historic rivals Belgium and Holland hosted the European Championship. More recently, when American and coalition troops arrived in Afghanistan and Iraq, soccer games were arranged for the local population, and coalition forces even played against an Iraqi team while the fighting was ongoing. In the 2004 Olympics, Iraq's soccer team overcame significant obstacles, was adopted as their own by spectators from throughout the world, and gave hope to the citizens of a war-torn nation.

Soccer may have image problems with stadium stampedes, hooliganism, and overly zealous fans who resort to violence against opposing fans, referees and even players, but more often than not it has been a unifying force.

It was for the sake of supporting such positive contributions that the Play Soccer Make Peace! project was initiated by the World Association of Non-Governmental Organizations (WANGO). This project came about because WANGO was selected by the Sun Moon Soccer Foundation to be the conduit for the distribution of one million dollars for the specific purpose of developing soccer worldwide and for the promotion of world peace. These funds, in turn, came from proceeds of the 2003 Peace Cup Soccer Tournament.

The Sun Moon Soccer Foundation, founded by Rev. Sun Myung Moon, runs three professional teams - national champion Seongnam Ilhwa in South Korea and two in Brazil. The Peace Cup is a biennial event to be held in different countries, and bringing the top clubs from each continent to compete. The 2003 Peace Cup was organized by PelÃ©, with the purpose of encouraging world peace through soccer games, transcending the barriers of ideologies and religions. In addition to being a soccer star, PelÃ© has served as Minister of Sports in Brazil and a UN ambassador for peace and goodwill. The 2003 Peace Cup had eight competitors. Five of these were the champions of their nations, including Besiktas JK (Turkey), PSV Endhoven (Holland), Olympique Lyon (France), Los Angeles Galaxy (United States), and Seongnam Ilhwa (Korea). Also competing were teams form Germany, South Africa and Uruguay. The final matches of the tournament were played at the Seoul Olympic Stadium with PSV Eindhoven being the winner of the 2003 Peace Cup.

According to the Peace Cup's Chairman, "The objective of the tournament is to present and spread the vision of peace and culture in the world through football. Profits from the games will be used to nurture the hopes and dreams of unfortunate youths in the Third World Countries."

The Sun Moon Peace Foundation met this challenge when it announced that it would be promoting world peace by contributing to the growth and training of young soccer players in the world's emerging and developing countries. This initiative recognizes the enormous potential of young people to develop their creativity and productivity when they focus their energy. Soccer is a great activity for them to do so. Because of WANGO's international network and grassroots connections, the Association was selected to design and carry out a soccer project.

WANGO firmly believes that Play Soccer Make Peace! can give support and impetus to NGOs dedicated to serving and uplifting their community in peace and goodwill. With the goal to encourage the development and training of youth soccer teams within fortyfour countries worldwide, the central feature of the project is the creation of a tournament to be conducted in each of the countries during which eight selected soccer teams compete. Monetary awards are given to all the competitors to help develop soccer in their area.

WANGO representatives in each of the target forty-four nations are asked to assume a key role of responsibility in establishing Play Soccer Make Peace! in their nation. They have a commitment to the well being of the community, and possess valuable skills and understanding that can be applied in carrying out the project. The representatives will act as catalysts to energize existing relationships and forge new partnerships to launch the project, as well as gather a wide diversity of people to help facilitate the event. Play Soccer Make Peace! touches the vast gamut of sectors in a society, including the youth, local communities, NGOs as well as the local and national governments.

Soccer can be played by any small group of players, but it takes organization, hard work and discipline to shape the group into a team, and to manage, sponsor and schedule games between competing teams. There are game rules and codes of conduct to follow, and emotions to control. In line with this, Play Soccer Make Peace! emphasizes adherence to ethical principles and codes of behavior in order to help guide the players, build cooperation within the team and encourage respect between the teams. The selected soccer teams must agree to pursue and maintain these principles and codes.

The teams' accomplishments are recognized in the tournament. Even the runners-up are awarded significant prize money. By becoming a member of the Play Soccer Make Peace! community, the soccer players and teams can work with NGOs to help to multiply a peace culture throughout the soccer leagues and associations of their country. A growing worldwide community of youth soccer players and teams will result. The soccer project, Play Soccer Make Peace!, is putting in place the necessary framework and resources to encourage this.

Mr. Taj Hamad, Secretary General of WANGO, noted several similarities that NGOs share with soccer. This first of these is teamwork. In order to win a soccer game, the players need to cooperate together as a team. In order for an NGO to work successfully, the members need teamwork within their organization, and need to work harmoniously with others in their community. Asecond is fair play. The highest ideal in sports is to play fair. The same element is necessary for an NGO to operate in an ethical manner in order to be trusted and to establish peace and justice within the society. Endurance is a third similarity between soccer and NGOs. In order to play well, soccer players need endurance, perseverance, and the spirit to never give up. It often takes great effort to score even a single goal. Soccer players always need to constantly regroup and reorganize in order to mount the next offensive. NGOs need to make ceaseless effort time and time again, never giving up, and always looking to improve and move forward. A fourth similarity is youth. Soccer is a game for the young! At least, the young at heart, like PelÃ©. It takes great energy. Great idealism and youthful energy also needed by NGOs to accomplish their goals and mission. It is work for the young of heart.

Play Soccer Make Peace! is moving quickly toward achieving its goal of reaching 44 nations. In July 2004, Nigeria, Ghana and the Democratic Republic of Congo introduced and successfully launched the first Play Soccer Make Peace! tournaments. Six additional will be held in Estonia, Guyana, Liberia, Philippines, the Solomon Islands and Zambia during September 2004. WANGO's objective is to conduct five tournaments each month, and finish all target countries by April 2005.

Play Soccer Make Peace! is being well received in each of the countries. Each country has its own particular situation and each WANGO representative contributes his or her own unique perspective and talents to the project. Plans are being made to replicate and sustain the project in each of the designated countries. A report on Play Soccer Make Peace! will be given at the Annual Conference in Budapest highlighting the project details and the progress of the tournaments, past, present and future.

The site of the first tournament launching the Play Soccer Make Peace! initiative was Kaduna, Nigeria. Under the key leadership of Mohammed Attah, WANGO National Representative in Nigeria, and in a remarkably short period of time, eight soccer teams were selected and all the details for the tournament were finalizedâ the stadium, referees, nurses, security, publicity, programs, and so forth. The tournament was held July 6- 11, 2004. All of the competitors agreed to fundamental principles of good sportsmanship.

Mr. Taj Hamad, Secretary General of WANGO, was present on the final day of the tournament. He greeted all the teams, the community officials and tournament volunteers and organizers and gave an address to launch the Play Soccer Make Peace! soccer project. He strove to inspire all to the higher ideals for which they were gathering and to the development of individual character as the basis for building healthy families, good societies and peaceful nations and world. 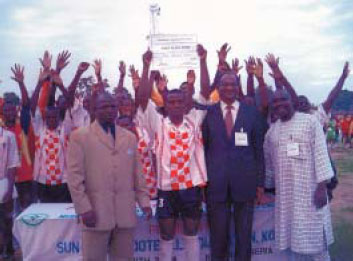 The winning team of the Nigerian tournament celebrates their victory

The final matches were exciting, with each of the teams playing their best before enthusiastic spectators. In addition to the eight competitors, two girls teams played a demonstration match. All of the teams gave good effort, were proud of their participation in the Play Soccer Make Peace! tournament, and received monetary awards to help develop soccer in their communities.