The WANGO Awards, presented annually, are one of the more prestigious awards for the NGO community. WANGO not only recognizes prominent international NGOs, but also the smaller, lesser-known NGOs in the least developed countries, whose exemplary service and success may have gone unnoticed or under-appreciated on the international stage. 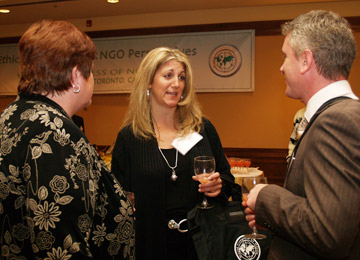 The 2007 WANGO Awards were presented in a format unique for a WANGO conference. Previous presentations at conferences were part of an âawards banquet.â The 2007 awards, held on Friday evening, were preceded by an Awards Reception, while the awards themselves were presented in a theatre style. Jean Rondon, WANGOâs Publications Director, served as Master of Ceremonies in the absence of Awards Chair Dr. Noel Brown, who was unavoidably stuck overseas when class=grame>a airline strike prevented his making the program in time. (The 2006 Awards, which were held independently of a conference, were presented in Spain in a similar manner, with a reception followed by the presentation of the awards in a theatre.)

The 2007 awards presented were in the following categories: Environment, Humanitarian, Peace & Security, and Education, Media, and the Arts, as well as a presentation to an outstanding individual for the Universal peace Award. Before each presentation, a video was presented highlighting the work of the NGO. 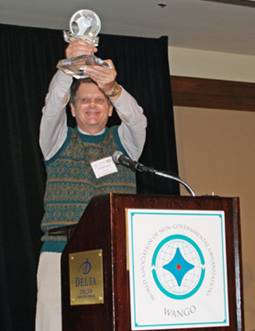 First to be honored was the Enviroment Award to EcotrÃ³pica (FundaÃ§Ã£o de Apoio Ã  Vida nos TrÃ³picos), a non-profit, environmental organization in Brazil devoted to conserving natural resources and maintaining the quality of life in tropical ecosystems lang=EN , and in particular conservation of the Pantanal, the worldâs largest freshwater wetland system. Located in South America, south of the Amazon and extending through millions of hectares of central-western Brazil, eastern Bolivia, and northeastern Paraguay, the Pantanal is essentially an immense alluvial plain, situated along the northernmost part of the Paraguay River and its tributaries. It is one of the most pristine and biologically rich environments on the planet, and offers numerous ecological, economic, cultural, recreational, and aesthetic values. Yet this area faces an uncertain future stemming from a myriad of socioeconomic pressures, exacerbated by the reality that 98% of the Brazilian portion is privately owned. Through EcotrÃ³pica, 60,000 hectares of the Pantanal, bordering Pantanal National Park (Parque Nacional do Pantanal Matogrossense) have been made into Private Reserves ( Reservas Particulares do PatrimÃ´nio Natural) â one of the most important complexes of private protection on the planet, where many species of animals, including some endangered species, call home. EcotrÃ³pica also has completed an inventory of biodiversity in the Serra do Amolar, works to help local people to survive, is developing âgentleâ ecotourism, and is dealing with agricultural, educational, sanitary, and financial issues. The award was received by the founder, Adalbeto Eberhard, who devoted years of his life to the organization, since 1989, for the hope for a brighter future for the Pantanal. 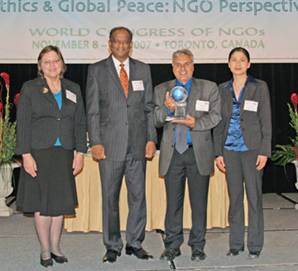 The 2007 Humanitarian Award was presented to SurfAid International and received by Founding Member and Medical Director, Dr. Dave Jenkins. SurfAid International was founded by Dr. Jenkins and other surfers on holiday who visited the Mentawai Islands off the western coast of Sumatra in Indonesia and found dreadful misery, poverty, and death beyond the palm-fringed shores of their so-called surf paradise. The ravages of malaria and other preventable diseases and inequality of lifestyles moved them by compassion to start SurfAid. Registering as a non-profit organization in New Zealand in January 2000 and later expanding offices to Australia, the United States, and Indonesia, SurfAid works to improve the health of the Mentawai people and to encourage and coordinate the support of the global surfing community. It has had remarkable success in combating malaria, providing healthcare for pregnant women, advancing childhood monitoring and nutrition, donating various health equipment and supplies, and mobilizing to aid victims of two devastating earthquakes.

The 2007 Peace & Security Award was presented to The Center for Conflict Resolution and Reconciliation, a Palestinian NGO committed to an alternative approach to conflict transformation. Cherishing the values of peace, reconciliation, forgiveness, respect, and hope, CCRRâs mission is to contribute to a prospering, non-violent Palestine by empowering marginalized groups to participate in the decision-making process that affect their everyday lives. The award was received by Dr. Noah Salameh, who founded the organization in 1999. CCRR has been working to strengthen democracy, human rights, and justice, considering these fundamental components for lasting peace.

The Education, Media, and Arts Award was presented to the World Association of Early Childhood Educators (AMEI-WAECE). The award was received by WAECEâs president, Juan SÃ¡nchez Muliterno. WAECE is class=fuente1>a non-governmental organization at the service of the education of young children. The Association w class=fuente1>orks to make it possible for every child younger than six years of age to exercise his or her right to an early educational service to fully develop capabilities, and moral and social responsibility. It places a large emphasis on values, including educating for peace. 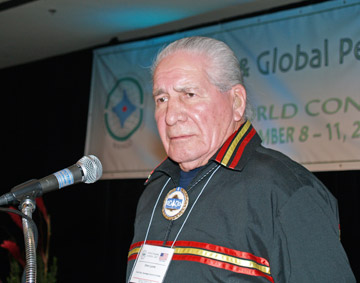 The 2007 Universal Peace Award, WANGOâs highest award for individuals, was presented to Chief Oren Lyons, a traditional Faithkeeper of the Turtle Clan, and a Member of the Onondaga Nation Council of Chiefs of the Six Nations of the Iroquois Confederacy. Chief Lyons, who also is Professor of American Studies at the State University of New York at Buffalo, was raised in the traditional lifeways of the Iroquois on the Seneca and Onondaga reservations in northern New York State. He has become a leading advocate for American Indian causes, recognized not only in the United States and Canada, but internationally as an eloquent and respected spokesperson on behalf of Native Peoples.He is also internationally renowned as an environmental and human rights advocate, and sought for his expertise on American Indian traditions, Indian law and history, and interfaith dialogue.

The Awards ceremony was followed by traditional dances performed by dancers from the Native Canadian Centre of Toronto. This performance, representing traditions of Indigenous Nations of Canada, was arranged independently of knowing that Chief Lyons would be an award recipient. During one of the dances, Chief Lyons joined in the dance, deeply moving the performers who felt their performance had been authenticated by his joining in. 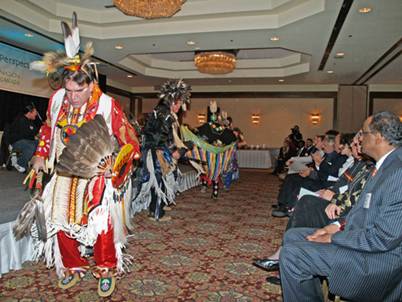 The Awards Ceremony itself had many memorable moments, such as the recognition by Dr. Jenkins of how much receiving this award has inspired the many volunteers working in the field with SurfAid (two of which had recently died in service to the communities). However, it did not allow amply time for the attendees to hear from the awardees. For this reason, a special session, the Panel of Excellence, was convened the following morning for more substantial presentations by the award winners. Clearly one of the highlights of the conference, the attendees heard moving presentations on the work and philosophy of these leaders, who had dedicated their lives for others. Adalberto Eberhard, who had worked for years without pay for his passion, the Pantanal, showed images of why the Pantanal is so beautiful and treasured. Dr. Dave Jenkins presented gripping stories not only of the work of SurfAid, but also of meaningless projects that donors have funded without recognition of the real needs of the people, such as an outhouse that cost great sums of money to produce but is only home to a duck, not used by the local inhabitants. He commended the well-meaning intentions of people, but was emphatic that the view that âdoing something is better than nothingâ is misguided, since it is important to âdo the right thing.â Dr. Noah Salameh had a gripping testimony of personal forgiveness, having spent 15 years in an Israeli prison as a youngster, but working together with Israelis and Jews, without resentment, to bring about a better Palestine. 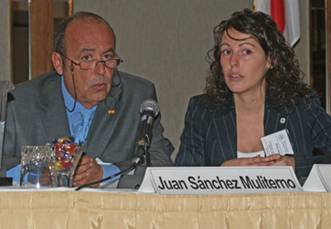 Juan SÃ¡nchez Muliterno and WAECEâs communications director Elvira Sanchez, detailed the vital importance of an education of values for children for the sake of a better future. Chief Oren Lyons concluded the session, chronicling matter of factly, without bitterness, the battle for recognition of the human rights of Native Americans. His passion for the environment, his advocacy for making decisions with a mind toward seven generations in the future, and his compassion for people and proper relations between people, moved the audience, leading one attendee from the United States to remark, âI wish he was running for President.â