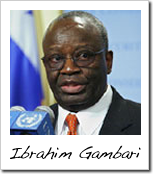 Dr. Ibrahim Gambari has led a life of extraordinary service to humanity, dealing with some of the most difficult situations in the world in terms of conflict and humanitarian suffering. Because of his rare leadership and drive to make a better world, and his unique accomplishments for humanity, the WANGO International Council, and the Awards Committee, under the chairmanship of Dr. Noel Brown (President of Friends of the United Nations), was delighted to recognize Dr. Gambari with the 2011 Universal Peace Award, WANGOâs highest award to individuals.

Dr. Ibrahim Gambari is head of the joint African Union-United Nations peacekeeping mission in Darfur (UNAMID), a post that he officially assumed on January 1, 2010, after appointment by UN Secretary General Ban Ki-Moon. UNAMID was established to quell the fighting and humanitarian suffering that has engulfed the region since 2003, with at least 300,000 people estimated to have died from the conflict and another 2.7 million people remain displaced from their homes. At full deployment, the mission â the UNâs largest â is expected to have some 26,000 troops and police officers.

Previous to assuming this post, Dr. Gambari had been serving as the Special Adviser to the UN Secretary General on the International Compact with Iraq and Other Political Issues (at the Under-Secretary-General level) and Special Envoy to Myanmar. He also has served as UN Under-Secretary-General for Political Affairs and the UN Special Adviser on Africa, and he headed the UN mission in Angola. From 1990 to 1999, he served as Nigeriaâs Ambassador to the UN.

Dr. Gambari received his bachelorâs degree in political science from the London School of Economics, and his M.A. degree and Ph.D. degree in political science/international relations from Columbia University. He has taught at the City University of New York, the State University of New York in Albany, and Ahmadu Bello University in Nigeria, and a visiting professor at Johns Hopkins School of Advanced International Studies, Georgetown University and Howard University. He was Chairman of the Department of Political Science at the University in Zaria, where he founded the first undergraduate program in international studies in Nigeria. Dr. Gambari also was a research fellow at the Brookings Institution, Washington, D.C., and a resident scholar with the Rockefeller Foundation Center in Italy. He has also authored several books and scholarly articles on international relations and foreign policy, including the books Theory and Reality in Foreign Policy Decision Making, Comparative Study of Regional Economic Integration, and The Domestic Politics of Nigeriaâs Foreign Policy. Dr. Gambari received an honorary doctorate from the University of Bridgeport and Johns Hopkins University elected him to membership of the Universityâs Society of Scholars.