An international non-governmental organization in general consultative status with the United Nations, WIT has been active since 1987 in promoting environmental health and literacy.

WIT also convenes one of the worldâs premier international conferences on health and the environment. Titled âInternational Conference on Health and the Environment: Global Partners for Global Solutions,â these forums gather international experts who present scientific papers addressing the link between degrading environments and diminished human health. Convened as a parallel event to the annual meeting of the UN Commission on Sustainable Development, the conferences have been held since 1992, with the 2013 event the 22nd such conference. 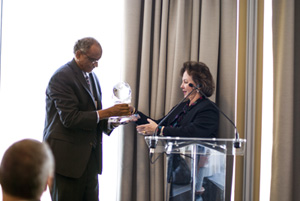 In presenting the 2013 environment award to Dr. Durbak, WIT Founder and Chair, WANGO Secretary General Taj Hamad noted that the WANGO Awards Committee was impressed with the dedication and very substantial accomplishments of WIT in its promoting of environmental health and bringing awareness and accurate actionable information about the impact of a deteriorating global environment on human health.