The 2005 WANGO Awards Banquet, held Saturday evening, November 19, at the La Fiesta Theater of the Renaissance Jaragua Hotel, was a highlight of the WANGO Conference. Five awards were presented in the categories of Education, Humanitarian, Society and Health, Peace and Security, and a special award for a Century of Service to Humanity and Society. Prior to the actual presentation of the Award to the recipient, a short film clip was shown of each NGOâs activities. The clips were moving and inspiring, depicting the extraordinary things being achieved with hope, optimism, persistence and patience. 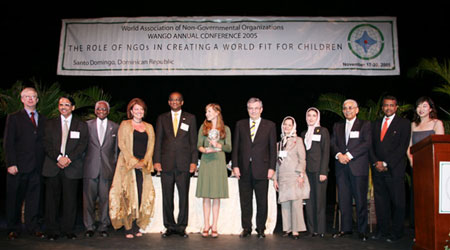 The first to be honored was the recipient of the WANGO Education Award, Bharativa Jain Sanghatana (BJS) of India, an organization that takes on challenges related to social reform, community development, disaster management, and especially, education. BJSâs education wing, the Federation of Jain Educational Institutes (FJEI) has over 1,800 educational institutes across India in its network. Through advancing a number of educational innovations, FJEI is helping guide educational institutions to ensure that they are in tune with todayâs world, and follows a conviction that education goes beyond only academic knowledge to also include an understanding and adoption of human values in terms of moral, ethical, spiritual and social components.

BJSâs Founder President, Mr. Shantilal G. Muttha, was a major entrepreneur who became a social transformer. Said to have built both his business and social service up from "virtually nothing," for the past 20 years, he has put a major portion of his companyâs profits into BJS. In accepting the Award, Mr. Muttha remarked that receiving the award make BJS feel more responsible and motivated to contribute even more.

The WANGO Humanitarian Award was presented to the Ladies Charitable Society (LCS) of Iran. Mrs. Ashraf Ghandehari and a group of philanthropic women who decided to coordinate their humanitarian efforts founded the LCS in 1973. Headquartered in Tehran, Iran, the LCS began with only a few members; today the Society includes 2,000 dedicated members and volunteers inside Iran and overseas, with branches established in five major global cities. The LCSâs principal service is in volunteering their time, energy and money for the Kahrizak Center for Living, Education and Rehabilitation of the Disabled and the Elderly. The Kahrizak Center is considered by many to be the largest and most advanced center of its kind in the Middle East.

Receiving the award on behalf of the Ladies Charitable Society were Farhat Mehdizadeh, International Affairs Coordinator, and Shima Mofid, Chief Administrator. Ms. Mofid, the granddaughter of Founder Mrs.Ghandehari, read a moving poem by the 13th century Iranian poet Sadi, and concluded by saying that "Whatever we do for God should be the best."

Hogar Crea Dominicano was recognized with the WANGO Society and Health Award. Founded in Santo Domingo, Dominican Republic in 1975 by Leopoldo Diaz Henriquez, its current Present, the NGO offers treatment, prevention and research related to the consumption of psychoactive drugs. The programs are open to all individuals who are addicted and need a helping hand, regardless of social class, politics and economics, and regardless of the type of drug problem.

Mr. Leopoldo Diaz Henriquez accepted the award. It is notable that the program of residential treatment of Hogar Crea Dominicano has one of the highest indices of effectiveness in the world, and has become a national and international model, used by various programs in Latin American and the Caribbean.

The recipient of the WANGO Peace and Security Award was Roots of Peace. Founded by Heidi Kuhn, Roots of peace is a humanitarian organization dedicated to eradicating landmines worldwide and rehabilitating the land to make it productive once more. Today, there are an estimated 70 million landmines lying in wait beneath the earthâs surface in over 70 nations. Roots of Peace removes the hazard of landmines and unexploded ordinance from the soil, and then works with international agencies and the private sector to revitalize the countryâs agricultural sector, bringing the demined land back into productive agricultural use. They have been active in many areas, including Afghanistan, Croatia, Angola, Cambodia and Iraq.

Receiving the award with her daughter Kyleigh, age 17, Ms. Kuhn spoke of turning "mines into vines," in an epiphany of planting grapevines in areas previously infested by landmines. With graphic reference to the capacity of landmines to maim and kill, she called them "weapons of mass destruction in slow motion." Concluding her speech, Ms. Kuhn reminded the audience of the Bibleâs promise of eventual world peace, quoting from the book of Isaiah, "May they beat their swords into plowshares and their spears into pruning hooks so that nation will not rise against nation and there will be no more war."

A special award, Century of Service to Humanity and Society Award, was presented by WANGO to Rotary International in recognition of this remarkable organizationâs 100 years of service to others. The worldâs first service club, Rotary, was formed on February 23, 1905. Today, approximately 1.2 million Rotarians belong to more than 31,000 Rotary clubs located in 167 countries. A global organization of business and professional leaders, Rotary provides humanitarian service, encourages high ethical standards in all vocations, and helps build goodwill and peace in the world. The organizationâs dedication to this ideal is best expressed in its principal motto, "Service Above Self."

Accepting the award on behalf of Rotary International was Mr. Serge Gouteyron, its International Vice President. Mr. Gouteyron described the historic commitment that Rotary made in 1985 to immunize all the children of the world against Polio. Since then, working in partnership with NGOs and national governments through its PolioPlus program, Rotary is the largest private-sector contributor to the global polio eradication campaign. Rotarians have mobilized hundreds of thousands of PolioPlus volunteers and have immunized more than one billion children worldwide. Mr. Gouteyron described the consequences of polio for its sufferers, and informed the audience that Rotary had already contributed US$600,000 000 to its eradication.